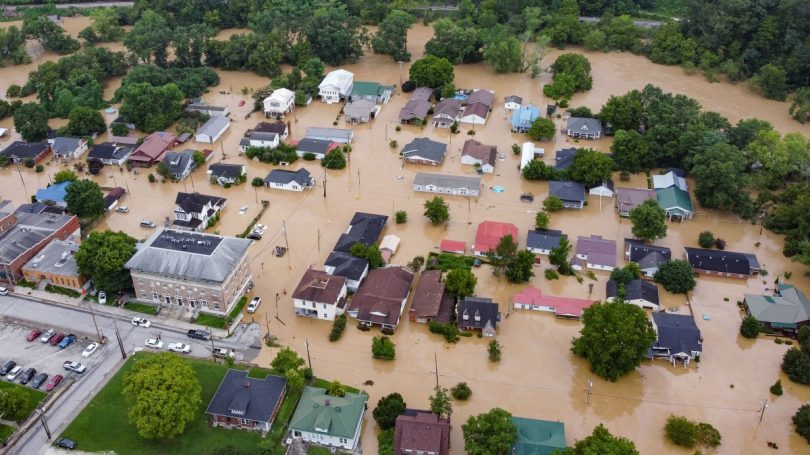 There’s more rain in the forecast for eastern Kentucky this week. At least 37 people are known to have died late last week after about a foot of rain caused severe flooding. Many more are still unaccounted for.

Hundreds of homes also flooded — many badly — and residents are still just starting to assess all that damage. Flood insurance can help people rebuild and recover financially after a catastrophic deluge, but very few people in the U.S. have it.

“In the country, we only have 4 out of 100 homes covered by flood insurance,” said Paul Huang with the Federal Insurance and Mitigation Administration, which is part of the Federal Emergency Management Agency.

In all of eastern Kentucky, “we only have a couple hundred policies,” he said. Total.

This means that most people whose homes were damaged or destroyed in the last week probably won’t be covered.

“This is very typical of inland communities that face these sudden, tragic flood events,” said Mark Friedlander with the nonprofit Insurance Information Institute.

“Even though we’re seeing more weather events that are causing significant flooding in inland communities, we have not really seen much of a change in terms of the percentage of homeowners who have flood coverage.”

People are only required to have flood insurance if they have a federally backed mortgage and live in a FEMA flood zone or if they’ve already received FEMA assistance for previous flood damage.

“But when FEMA maps the flood risk, they do not usually include rainfall-related flooding,” said Carolyn Kousky with the Environmental Defense Fund. “So you have people who didn’t realize that they were at risk of flooding now getting flooded.”

And if they don’t have flood insurance, they’re pretty much on their own. Regular insurance won’t cover water damage, and there’s very little federal aid available.

“People need to know, if you don’t have flood insurance, your mortgage is at risk,” said former FEMA Administrator Craig Fugate.

At this point, he said, it doesn’t matter where you live — your home could flood.

“The climate’s already changed. Even if you eliminate all greenhouse gases today, what has happened is already in motion.”

Fugate added that in the short term, one of the best ways to build resilience is to get more people to buy flood insurance.

There’s a lot happening in the world.  Through it all, Marketplace is here for you.

You rely on Marketplace to break down the world’s events and tell you how it affects you in a fact-based, approachable way. We rely on your financial support to keep making that possible.

Your donation today powers the independent journalism that you rely on. For just $5/month, you can help sustain Marketplace so we can keep reporting on the things that matter to you.