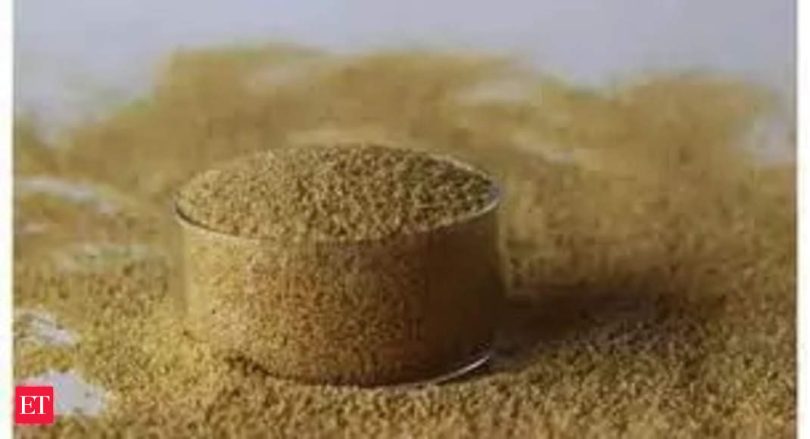 The missions would also be asked to identify potential buyers such as departmental stores, supermarkets and hypermarkets for organising business-to-business (B2B) meetings and direct tie-ups for Indian millets.

As per the promotion strategy, major international retail supermarkets like Lulu group, Carrefour, Al Jazira, Al Maya, Walmart, would also be roped in to establish millet corner for branding and promotion of millets, an official statement said.

“As per the government’s robust strategy to promote millets, Indian missions abroad would be roped in branding and publicity of Indian millets, identification of international chefs as well as potential buyers such as departmental stores, supermarkets and hypermarkets for organising B2B meetings and direct tie-ups,” the commerce ministry said in a statement.

It also said that ambassadors of foreign missions in India of the targeted countries and potential importers would be invited to showcase various millet-based products, including ready to eat millet products and facilitate business meetings.

“To promote shipment of nutri-cereals, the ministry of commerce and industry has prepared a comprehensive strategy to promote Indian millets exports across the globe commencing December 2022,” it added.

The initiatives comes at the backdrop of the United Nations’ General Assembly (UNGA) declaring 2023 as International Year of Millets.

The exercise is aimed at popularising Indian millets as well as its value-added products across the world, it said.

It added that the Centre has planned to facilitate participation of exporters, farmers and traders in 16 international trade exhibitions and buyer-seller meets.

The government is also mobilising startups for export promotion of value-added products in the ready-to-eat and ready-to-serve category such as noodles, pasta, breakfast cereals mix, biscuits, cookies, snacks and sweets.

A Nutri Cereals Export Promotion Forum has been set up to give impetus to the exports and to remove the bottlenecks in the supply chain of nutri cereals.

India is one of the leading producers of millets in the world with an estimated share of around 41 per cent in the global production.

As per the Food and Agriculture Organisation (FAO) of the United Nations, world production of millets in 2020 was 30.464 million metric tones (MMT) and India’s share was 12.49 MMT.

India recorded 27 per cent growth in millet production in 2021-22 as compared to the output in the previous year at 15.92 MMT.

However, it is estimated that the millet market is set to grow from its current market value of more than USD 9 billion to over USD 12 billion by 2025, it said.

Millets are rich in calcium, iron, and fibers.

The varieties of millets exported by India include Bajra, Ragi, Canary, Jawar, and Buckwheat.

The major millet importing countries in the world are Indonesia, Belgium, Japan, Germany, Mexico, Italy, the US, UK, Brazil and Netherlands.