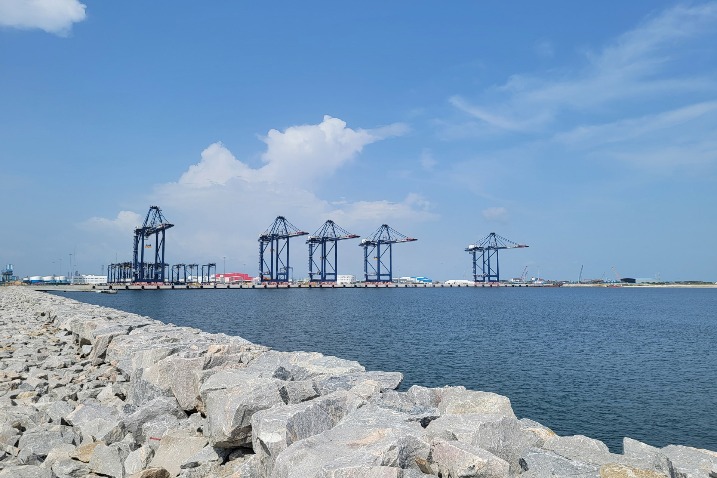 Construction work on the biggest seaport in Nigeria was completed on Monday, a major step toward Africa’s largest economy breaking through a bottleneck in international trade and achieving accelerated economic growth.

Lekki Deep Sea Port, with a berthing depth of 16.5 meters, is a landmark project in the city of Lagos with a total investment of $1 billion. It is the first deep seaport in Nigeria and will be able to handle 1.2 million containers annually, increasing the country’s container handling capacity by up to 80 percent, according to China Harbour Engineering Co, the port’s builder.

At a ceremony on Monday marking the completion of Lekki Deep Sea Port, Cui Jianchun, China’s ambassador to Nigeria, said the project is critical to promoting international trade for Nigeria, and it cements China-Nigeria friendship.

“This is very important for Lagos State and for Nigeria,” he said. “Lekki Deep Sea Port can anchor and accommodate the biggest ships in the world. It will be the gateway to Nigeria, and will play a critical role for Nigerian commodities to reach the international market.”

Cui said the deep seaport is a landmark project carried out under the China-proposed Belt and Road Initiative. Many major infrastructure projects, such as roads and railways, have been completed in Nigeria and many other African countries to improve connectivity and exchanges. China has built around 100 ports on the continent since 2000, he said.

“I hope that in the coming years, China and Nigeria — as long as we work together, especially in the infrastructure sector — we can make a difference.”

Babajide Sanwoolu, executive governor of Lagos State, applauded the completion of the construction of “one of the most modern deep seaports in the world”, saying it is the pride of the state.

“This new port will position Lagos as a new maritime logistics hub in West Africa, while helping Nigeria to attain full economic leadership in the African Continental Free Trade Area agreement,” he said, adding that the seaport will directly benefit local communities by creating nearly 200,000 jobs for locals and generating enormous revenue in the coming decades.

Now that construction work on the port is completed, many other infrastructure projects will be built to complement its role, he said.

An airport will be built near the seaport, and other massive infrastructure projects near the Lekki Free Trade Zone will also soon be built to spur a massive economic transformation in Lagos State in the years ahead, he said.

Meanwhile, the improvement of infrastructure and development of related industries in Lagos are necessary to make full use of the new deep seaport and give full play to its role of facilitating economic development and a transformation of Nigeria, he said.