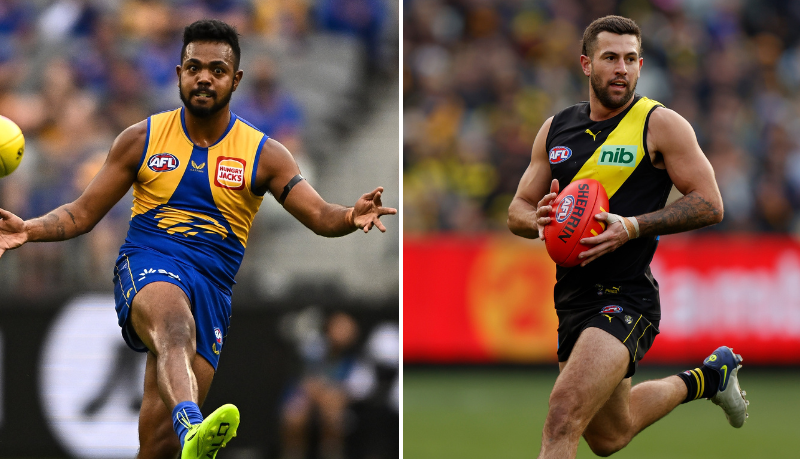 Port Adelaide GM of football Chris Davies has provided an update on a number of players being linked with the club.

West Coast small forward Junior Rioli has requested a trade to Alberton and according to Davies, he brings with him areas of expertise that the Power desperately need.

He spoke of Rioli and Port’s need for him on AFL Trade Radio’s The Early Trade.

“If you’re looking at areas of our list that we left ourselves (in) short this year, clearly that high half-forward position is an area that I think is becoming more important,” he said.

“With Connor Rozee and Zak Butters spending more time in the midfield this year and Orazio Fantasia unable to get on the park, we left ourselves short in that position.

“From our perspective, it’s his goal sense, his ability to link that midfield-forward area which is an area of our team that we need to get better at if we want to be more competitive than we were this year.

“We think that we’re going to be able to get Junior fit enough to play at AFL level.

“There’s no doubt that he’s a really good player when he’s fit and going.”

Davies also touched on several other players who have been spoken about in Port trade circles in recent times.

“We’ve got interest in South Australian players who might be interested in coming home, definitely,” he said.

“Jack is obviously a good player, I’m not sure where his situation is at with Richmond. Any player who is from South Australia who potentially wants to come back, we’ve got to take an interest in them.

“There’s too many players that leave South Australia to go back to their home states and for that matter for every club, teams who lose players because they want to go to different states.

“We need to make sure that we’ve got an interest in players who are wanting to come home at any point in time.”

Has Pickett given him an indication that he wants to move to Port Adelaide?

Is Georgiades looking for opportunities elsewhere?

“I think that was another one that gathered a head of steam itself,” said Davies of the Port forward.

“I imagine when Junior (Rioli) highlighted that he wanted to come to Port Adelaide, it was more coming from Perth about who potentially West Coast might be interested in at Port Adelaide.

“So it’s not something that we’ve contemplated at all.

“‘Georgy’ is contracted to our club and we see him as a pretty important part of our forward line into the future.

“There’s not too many 20, 21-year-old players that have had the number of shots on goal that he has had over the last couple of years.

“We took a punt on him. He hadn’t played the year before we drafted him. He’s done some really good work for us and he’s going to be a 10-plus year AFL forward who you don’t contemplate giving up very lightly.

Were the Power ever a chance?

“Rankine was very keen to get to Adelaide for whatever reason from very early on and we weren’t in that conversation.

“As much I can wish the Crows all the best, good luck getting it done and well done for getting him there.”

“We had an initial discussion with Brodie’s management about where he wanted end up.

“It’s reasonable to suggest that he saw his future still in Victoria.

“That conversation came and went pretty quickly. We have to maintain interest in players who might be contemplating coming back to South Australia, but I don’t think Brodie was ever of that mindset.”

He says the club is expecting some significant compensation for the 27-year-old.

“It will be the most lucrative free agent deal from what we know through this free agency period,” Davies added.

“We’re not 100 per cent sure at the moment. We’ll let things play out but I think it’s got to be close to a first-round, if not an end of first-round selection.

“No one really knows where these things are going to end. We don’t really know but I imagine it will be a first or second-round selection.”