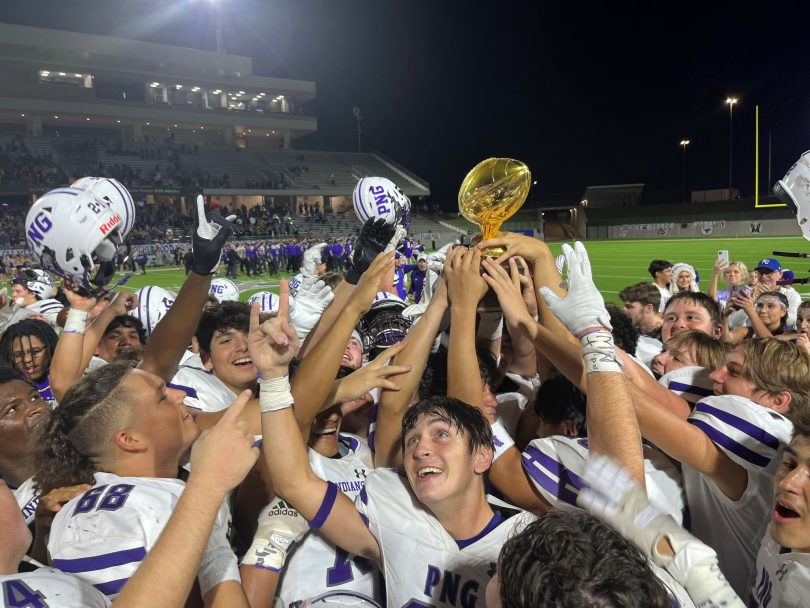 The Port Neches-Groves football team has earned a spot in the state championship game.

Port Neches-Groves dominated during a 42-14 win over Liberty Hill on Friday night in the Class 5A-II state semifinals. Enterprise sports editor Matt Faye and photojournalist Kim Brent were on the sideline at Legacy Stadium in Katy bringing live updates throughout the game.

Here’s a play-by-play of how Port Neches-Groves ensured its first state-title appearance since 1999.

Port Neches-Groves uses a long opening drive to take an early lead. Kicker Andres Sandoval is true on a field goal, and PN-G takes a 3-0 lead.

Liberty Hill responds right back with an 83-yard touchdown run by junior fullback Ben Carter to take its first lead of the game. The run came on a 2nd-and-11 play after the Panthers had fumbled the football.

Back and forth we go. What a throw by Cole Crippen to find top target Chance Prosperie on a post route over the middle for a 26-yard touchdown. Extra point is no good…that might prove costly down the road in this game.

Port Neches-Groves adds to its lead. Short run by Landon Guarnere around the edge did the trick and provided another touchdown for PN-G. Sandoval is good this time on the extra point.

PN-G’s offense has yet to be really stopped so far. It’s been that way all postseason.

A promising moment for Liberty Hill turns into disaster as a long run ends with a fumble deep in Port Neches-Groves territory. PN-G recovers and drives down the field for more points.

Sandoval with another field goal. He’s been on the money save for the one missed extra point. The lead is now 12 points for Port Neches-Groves.

No one said it would be easy. Liberty Hill’s Slot-T offense pushes and pounds its way through the Port Neches-Groves defense on a must-have drive for the Panthers.

Liberty Hill just barely crosses the goal line on a 1st-down and short. Still some time for PN-G to do something on offense right before the half.

The Port Neches-Groves offense wasn’t forced to punt all half. After Liberty Hill’s touchdown late in the second quarter, Crippen led PN-G on a quick drive aided by a long pass down the sideline to Prosperie.

Time management was done perfectly by PN-G on the drive. With two seconds left in the half, Crippen found Shea Adams on a jump ball touchdown in the corner of the end zone.

Liberty Hill was stopped relatively easily on the first drive of the second half, then punted to try and pin PN-G back. But nothing has slowed down this Port Neches-Groves attack, and the lead is now even bigger for PN-G.

Isaiah Nguyen is having a nice game and was very productive for PN-G on its latest scoring drive. Shea Adams finished it off with a quarterback sneak on a 3rd-and-goal play for a touchdown.

Huge 4th-down stop for the Port Neches-Groves defense near midfield. On 4th-and-3, Liberty Hill tried to run a power up the middle, but it didn’t work. Another score for PN-G could put this game out of reach.

At this point, it looks like the clock is all that separates Port Neches-Groves from the state championship game. PN-G uses up a ton of time, but gets stopped on a 3rd-and-goal play at the 5-yard line.

Even so, it’s now a 21-point lead for PN-G after another short field goal.

The Port Neches-Groves offensive line is just pushing people around at will. Liberty Hill is very outsized up front, and its showing late in the game. Hand-offs for big gains happened on play after play during a game-sealing drive for PN-G.

Shea Adams scores again with a physical run up the middle on a direct snap. That score will certainly seal things up for Port Neches-Groves.

An interception on Liberty Hill’s last drive ends all hope of any miracle comeback. Port Neches-Groves then fittingly runs out the clock, and the party has begun for the PN-G faithful.

This is an updating story. Check back for more.