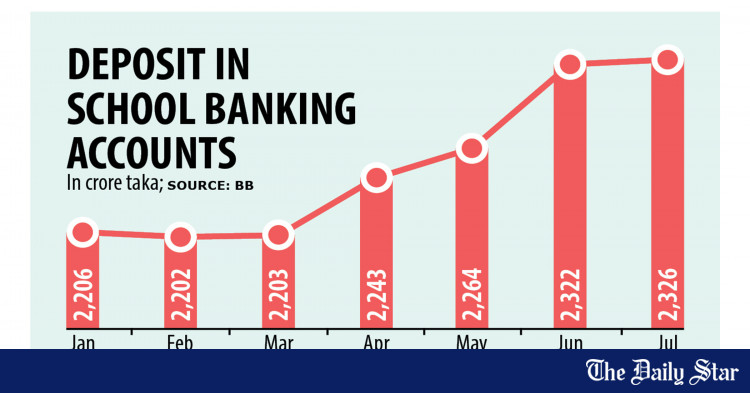 School banking is increasingly gaining popularity among students, exemplified by total deposits in such accounts surpassing Tk 2,300 crore in July despite ongoing economic hurdles such as rising inflation.

Students deposited Tk 2,326 crore in the accounts as of July this year, up 7 per cent year-on-year, according to Bangladesh Bank.

The number of accounts under school banking rose 13.6 per cent year-on-year to 31.89 lakh in July this year.

A number of banks earlier took a set of measures to widen school banking operations as per instructions of Bangladesh Bank, which mainly gave a boost to financial inclusion among students, said a central bank official having substantial knowledge on the matter.

The number of accounts and the outstanding balance under the school banking programme would have increased manifold had not the coronavirus pandemic and the ongoing economic crises hit the economy, he said.

The financial condition of a large number of parents of students is now critical due to the upward trend of inflation, which has already eroded their income base.

Deposits in banks usually decline in the time of inflation, but the matter is different for school banking.

In addition, educational institutions remained closed for a majority of 2020 and 2021 in attempts at weaking the pandemic, putting an adverse impact on the school banking operations.

“Despite all the odds, it is a positive sign that both the outstanding deposits and the number of accounts under the school banking programme rose in recent times,” the official said.

The central bank introduced school banking in 2010 as a part of its efforts to widen financial inclusion and make students financially literate.

The scheme aims to instil the habit of savings into students and make them more efficient in money management.

The accounts come with a number of advantages, such as waivers on fees and charges, free internet banking, low minimum balance requirement and debit card availability at low costs.

Accounts can be opened with a minimum deposit of Tk 100.

Saiful Amin, head of branches of The City Bank, said they were laying more emphasis on widening the school banking operations in rural areas rather than in urban ones.

“The City Bank is aiming at expanding the banking operation in order to create deposit habits among students and strengthen their knowledge about financial literacy,” he said.

“We are trying to speed up our financial inclusion programme by carrying out different initiatives including to widen our school banking operations,” he said.

The bank has already instructed all branches to give some emphasis on school banking like it does for others, Amin said.

“We hope that the school banking operation of The City Bank will spread more in the days ahead,” he said.