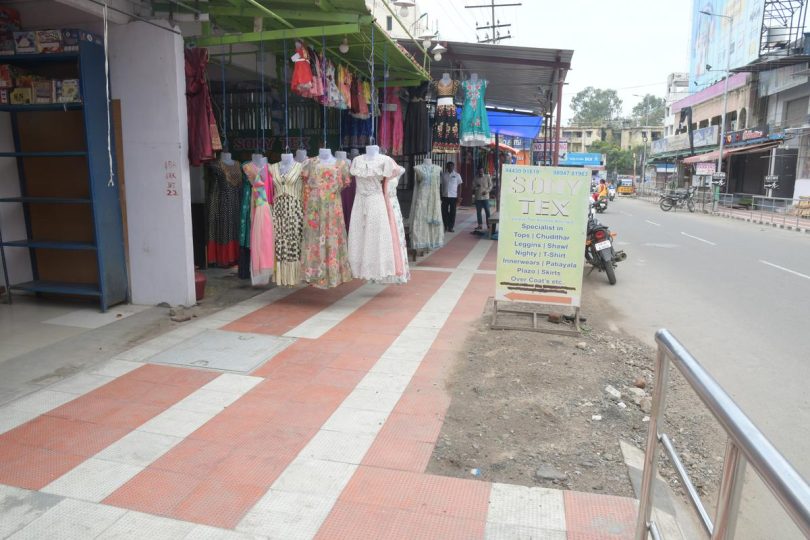 Pedestrians continue to face hardships on Veterinary Hospital Road as textile traders have erected permanent roof shelters on the footpaths and encroached upon the space.

Erode Corporation developed over eight roads, including Periyar Nagar, Kalaimagal School Road, Jeevanandam Road and SBI Road, as smart roads at a cost of ₹55 crore under the Smart Cities Mission. In most of the roads, all the footpaths on both sides of the roads are encroached upon by shopkeepers and are used to park two-wheelers.

Hundreds of textile shops are located along Veterinary Hospital Road and a few traders have erected roof shelters on the footpath and placed garments for sale. “The footpaths are encroached upon by the traders and we are forced to walk on the road,” said Amrithalingam, a resident. He said huge amount spent by the civic body for the benefit of the pedestrians was not benefiting them. The civic body should take action on the encroachers, he said.

“All the footpaths on smart roads are encroached and the pedestrians continue to risk their lives by walking on the busy roads,” said T. Logesh, another resident.

Road users said 16 metres of the total road width were used for footpaths while the rest of the road space that was less than 15 metres was used for unauthorised parking. “Frequent congestion prevails on State Bank of India Road as cars are parked on both sides throughout the day,” said Ramalingam, a motorist. The Corporation should reduce the width of footpaths on all smart roads, he added.

When contacted, Corporation Commissioner K. Sivakumar said encroachments on the footpaths would be removed to ensure that the pedestrians walked without disturbance.