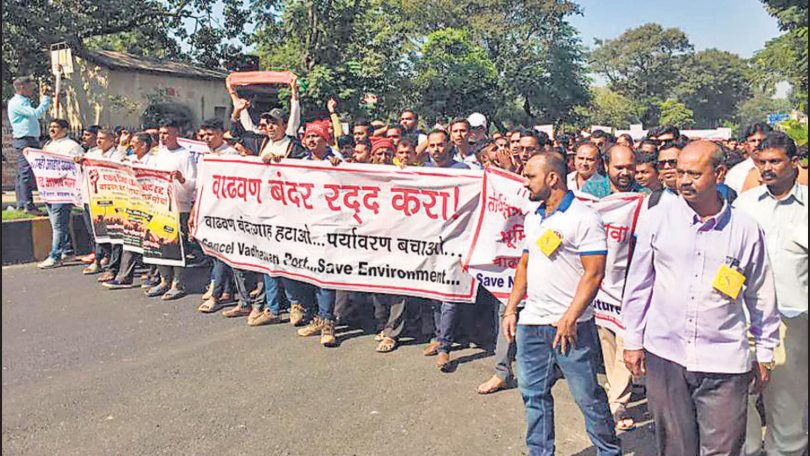 An unpublished study on the feasibility of a mega port at Vadhavan has revealed that the area was also evaluated for setting up a crude oil refinery, which is not permissible in the Dahanu eco-sensitive zone (ESZ).

Though the evaluation was done in 2017, this recent disclosure has spooked locals and experts who have urged authorities to clarify future plans for the port’s expansion, and development of ancillary industries.

“Vadhavan as a location has the potential to support a greenfield crude oil refinery. This traffic will only realise if the Centre’s plan to set up a port-based crude oil refinery materialises. There are two opportunities for the proposed port to handle crude and POL (petroleum, oil and lubricants) products,” the report, a copy of which is with HT, said.

The first opportunity refers to a refinery with a capacity to handle 20 million tonnes per annum (MTPA), which is envisioned in 2016’s National Perspective Plan for Indian ports under the Centre’s Sagarmala initiative. The second is a 60MTPA refinery to be run by a consortium of Indian Oil Corporation Limited, Bharat Petroleum Corporation Limited (BPCL) and Hindustan Petroleum Corporation Limited. This project’s specifics are nearly identical to that of the west coast refinery which is now being established at Ratnagiri’s Barsu after the plans to build it in Nannar and Roha invited backlash from locals.

Commissioned by Jawaharlal Nehru Port Authority (JNPA), the study – Traffic study and demand assessment for greenfield port at Vadhavan, Maharashtra – was conducted in 2017. It also formed the basis of a detailed project report (DPR) prepared in 2018 for the proposed port. The document was accessed under the RTI Act by Akhil Maharashtra Machimaar Kruti Samiti (AMMKS) in December 2022.

A senior JNPA official, who is overseeing the Vadhavan port project, said, “We are not in the business of setting up refineries. We are in the logistics business. Neither us, nor the state or the Central government, nor any private party has put forward a proposal for a refinery in Vadhavan. Yes, it was evaluated, but that was done to understand the traffic potential for POL products. In the new, updated DPR, we have not only removed the mention of refinery but have also withdrawn coal as a commodity.”

The study has forecast maritime traffic of various commodities, including containers, coal, LPG, edible oils, fertilisers, chemicals and wheeled cargo, for Vadhavan port over a period of 30 years starting 2020.

Nevertheless, this information has stoked fears among those whose lives will be impacted the most by Vadhavan port.

Bhushan Bhoir, a marine biologist from Palghar who has been mobilising opposition to the project, said, “For us, whose ancestral lands and livelihoods are at stake, this has been the fear all along that there are other plans which will completely change the landscape of Dahanu. First they will illegally build a port, then a refinery. This traffic demand study is an official document, so it leaves the door open for a refinery in the future. The report must be declared null and void.”

Other experts are less worried. Debi Goenka, executive trustee, Conservation Action Trust, said petroleum, or even coal, is not going to remain a profitable product to invest in or export in the near future.

“With renewables gathering steam, the requirement of petrol for use in vehicles is going to come down globally. The west coast refinery project is export-oriented, and is supposed to come up in Ratnagiri for which a special purpose vehicle has also been constituted. I do not envision a second refinery coming up on the west coast,” he said, adding that a previous attempt by BPCL to moot a refinery in Dahanu taluka “had a quiet death”.

However, under the National Perspective Plan, the Centre has plans to set up a refinery with 20MTPA capacity on both east and west coasts.

As such, the traffic potential for Vadhavan port is estimated to start with 6MTPA in 2025, rising to 21MTPA by 2051. This proposal has been assessed in JNPA’s 2017 traffic study against four parameters – land acquisition, proximity to sources of crude oil, availability of manpower, and availability of infrastructure at ports. “Vadhavan port is scoring well against all parameters,” the study said, concluding that it is a more feasible location for a refinery than other nearby ports.

“This is what worries us,” Devendra Tandel, president of AMMKS, said. “The entire Palghar fishing belt is a rich nursery that supports artisan fishers from Palghar to Mumbai, and even some parts of Gujarat. We have seen how industrial activities have completely killed our traditional livelihoods at Tarapur, and in Nhava Sheva where JNPA set up a port in the 80s. The government should clarify exactly what their future plans are for development of the area around Vadhavan port.”

Narayan Patil, a Palghar resident who heads Vadhavan Bandar Virodhi Samiti (a petitioner against the project in the Supreme Court), said, “Be it a port or a refinery or any other industry, we will oppose it. Dahanu taluka has already suffered ecologically due to the development of the Ahmedabad bullet train, the Mumbai-Vadodara expressway, and the Western Dedicated Freight Corridor. This has to stop now.”